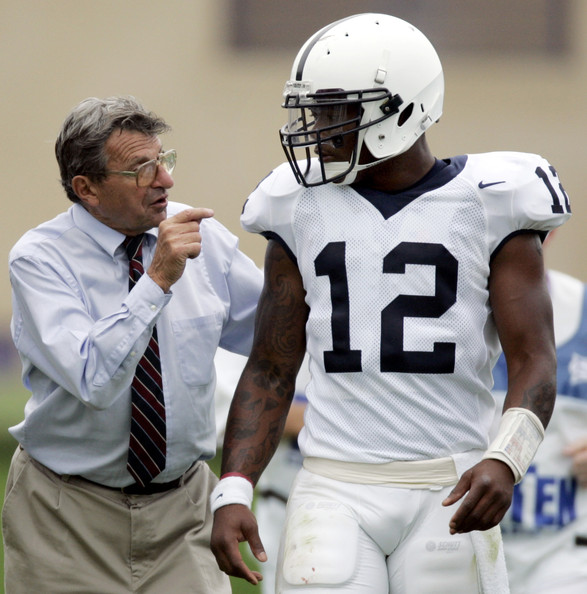 Long before Michael Robinson had won a Super Bowl as a fullback, he was once the starting quarterback for the 2005 Big 10 conference champion, Penn State Nittany Lions. During his senior year he threw the 5th best season by a PSU QB at that time (now 8th). His only full year as the starter at PSU, he lead the Nittany Lions to an 11-1 record, 3rd ranking in the AP Polls, a share of the Big 10 title with Ohio State, an Orange Bowl victory against Florida State and finished 5th in the Heisman Trophy voting. He helped Penn State and JoePa accumulate 27 wins in his four years and their first bowl win and double digit win season since 1999.

Insert the Jerry Sandusky scandal with the consequences in 2011 handed down by NCAA President, Mark Emmert. Penn State had numerous sanctions placed against it as well as bowl bans, probation, scholarship reductions for the football program and a hefty fine, not to mention 10 or so corrective actions the University had to implement.

Former players from all eras weighed in on the sanctions and the end of JoePa’s tenure, being fired during the investigation. Nine former players including the JoePa estate and several Penn State trustees last year, filled a lawsuit against the sanctions delivered by the NCAA calling them a rush to conclusion in the Freeh report. The report states that the NCAA, Emmert and then chair of the NCAA’s executive committee Edward Ray “acted in clear and direct violation of the organization’s own rules based on a flawed report by former FBI director Louis Freeh”. Freeh led the university’s internal investigation into the scandal, arriving at scathing findings that pointed blame in part on Paterno and three former school officials. The suit hopes to reverse the sanctions levied due to Sandusky’s actions.

At the John Travers Memorial Golf Tournament on May 9 at Blue Ridge Country Club, Robinson auctioned off a specially signed picture of himself as the beloved PSU QB. The picture was auctioned for $325 which was inscribed with a distinct message for the NCAA President, “Dear Mr. Emmert, Come take my wins! – Michael Robinson 12”

There is no doubt that what Sandusky had done is completely disgusting, monstrous and absolutely not what any of the victims parents/families thought their child was being subjected to. This was supposed to be a man who was out to help their child through their rough patches, guide them to success and groom them to be good citizens. His sentence is what it is and has been worked through the justice system. The day the sanctions were enforced on the university caused much debate as to whether the NCAA follows their own rules in handing down punishments on universities in the wake of scandals.

Through the years of coverage on the scandal and the countless interviews of former players, fans and college sports analysts, the monetary sanctions levied on the university seem just, since it will go to help the youth affected by such horrendous acts. The other sanctions however seem unjust as it punishes other innocent people, specifically the student athletes that took part and are prideful of the 112 wins taken from the program. It also punished the potential future student athletes that were turned away from a chance at a scholarship from the football team due to the reduction of available scholarships the program could use. The reason as explained by Mark Emmert was that no one man or program is above the university and must be punished.

Mike Robinson’s signed photo statement to Emmert seems to be a mini jab at the NCAA President however there is deeper meaning that all former PSU players have voiced on the sanctions. It was tough enough for the current players at the time to have to play to the end of the season under the media microscope of the investigation. Why further punish the current student athletes in the football program, potential future student athletes of the football program and the former student athletes from those 1998-2011 football programs? What was taken from the victims can never be replaced, but for whatever reasons that Mark Emmert had come to a conclusion back in late 2011-early 2012, common sense was not used and the situation in Happy Valley worsened.

The 27 wins meant the building of character to Mike Robinson. It meant the four years of tutelage under JoePa and the many lessons on growing up and being responsible, even lessons on how to treat a lady. There is no question from the alumni players, how much JoePa meant and still means to them and how much he would always have their best interests in mind. Maybe this is the time for them to be here for him since he had passed shortly after leaving the program. The alumni players have stood firm for what kind of man JoePa was and what he stood for. They’ve all tried to make sure that for the good JoePa had done in his lifetime at PSU, people still remember him for it. For Mike Robison, his part is standing up for those 27 wins.